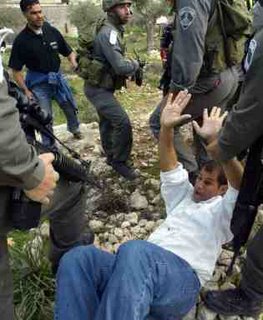 Bil'in, Palestine - At least 6 demonstrators were injured by Israeli soldiers who fired on them with rubber bullets during a protest against the separation wall being built by Israeli to separate it from the Palestinians. A dozen Israeli and foreign protesters where also arrested. The town of Bil'in is center of many "anti-apartheid wall" demonstrations like yesterday's which was organized by Anarchists Against the Wall and included hundreds of people occur on a weekly basis.