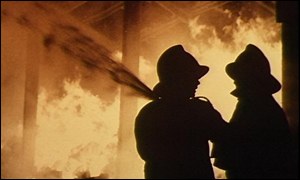 Saginaw, Michigan - Two teen arson suspects are in police custody after allegedly setting fire to their high school. According to investigators the pair, Katie Davidson and Nicholas Meyers both 19, primarily targeted Hemlock High school's computer design lab with incendiary devices on Friday, two days before the official start of Arson Awareness Week 2005. As police claim is the case with the Hemlock High School incident the vast majority of school fires are attributed to "arson or suspicious device." Most attacks on school buildings be they arson or more simple vandalism are perpetrated by current or former students. In the US fires cost an excess of $100 million in damages each year. This little covered guerrilla war is not endemic to the North America. Per capita Great Britain may have a greater insurgency on its hands where attacks are increasing in size and frequency. On average three schools in that country are threatened by arson each day!