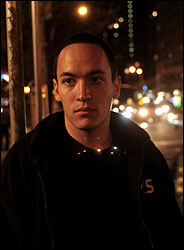 New York, New York - Yusuke "Josh" Banno, 21 was prepared to go to trial last month when he flew to New York from his home in Arizona. Josh has been prepared to go to trial on charges of assaulting a police officer and reckless endangerment stemming from an incident in which a large papier-mâché green dragon was lit on fire last August during an Anti-Republican National Convention (RNC) protest. If convicted of the offenses Josh would have faced seven years behind bars. Thanks to the hard work of his friends, who tracked down video and photographic documentation which show Josh far from the origins fire, the police officer who positively identified Josh as the "ringleader" has been forced to change his story.

Earlier in the week a New York Police Officer was caught lying under oath, in another RNC related criminal case, when the video evidence contradicted his testimony. Another video submitted in support of demonstrators showed that the police video had been doctored and key frames had been removed in order to convict a man who was arrested on his way to a sushi restaurant in the area of protests. The NYPD is not admitting any wrongdoing, and the DA's office has claimed that a technician simply made an error when they removed the frames in the second case. Much of the video and photographs used in court were collected by volunteers working with I-Witness Video and the National Lawyers Guild.

The same series of photos, which are likely to clear Josh, also led to the dismissal of cases against his co-defendants. Six of the 12 people he was arrested with were forced to plead guilty to minor misdemeanor charges because they could not afford to travel between New York and their homes in other states. The other six defendants were offered to have their cases adjourned in contemplation of dismissal on Tuesday. Josh's Lawyer Sabrina Shroff told the assistant DA Robert Ferrari to "give up" before she "made an ass of him" in court. Today a spokeswoman for the Manhattan district attorney's office confirmed that they would do just that.