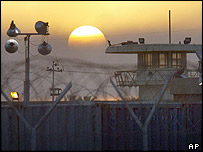 Baghdad, Iraq - Insurgents staged a highly coordinated large-scale assault on the notorious Abu Ghraib Prison using car bombs, rockets, mortars and light arms. 44 US soldiers were injured while defending the jail with armored helicopters and tanks. The assault began around sunset and involved an estimated 40-60 insurgents at least one of whom was also killed. The prison is at the center of the detainee abuse scandal which broke last year has been targeted by anti-US forces numerous times since the occupation began.

In March the military publicly considered moving the prison to a more secure location within Baghdad International Airport. This has been the most successful and intense attack on Abu Ghraib and will likely result in the US abandoning the location. Last week US authorities closed a 600-foot escape tunnel inmates had dug under the perimeter of another prison.

Both the Army and many US media sources have been touting the recent decline in number of insurgent attacks as a sign a weakening of US opposition sentiment in the country. On the largely forgotten Afghan front of the US's self described War on Terror there has been a surge in insurgent attacks against US forces and the recently installed US allied government.