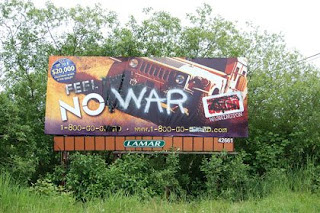 Chehalis, Washington - Vandals with a message redesigned a National Guard recruitment billboard to convey a decidedly anti-war statement. The roadside advert with an image of a military hummer originally said, “Feel the Noise,” but was altered to read “No War.” The email address and phone number listed on the billboard were also painted over. It seems that black and white spray paint was all that was used to change the sign.

The incident occurred during a time when 73 members of the National Guard’s “G” Company, based in neighboring Centralia, are preparing to deploy for a for a 12-month tour in the Middle East. A spokesperson from the Chehalis Police Department said yesterday morning that they had yet to receive any complaint about the redesigned billboard. According to National Guard recruiters, this was the third incident in which a National Guard recruitment sign was damaged or stolen in the past few weeks.