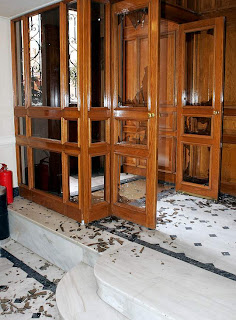 Athens, Greece - A group of about 20 youths attacked the General Confederation of Greek Labor (GSEE) building, in broad daylight, with rocks and petrol bombs. The assault took place as union leader Tassos Panagopoulos was attempting to exit the building. Police believe that anarchists are responsible. Anarchists groups claim that the unions have abandoned workers' interests and have aligned themselves with employers. Anarchists are also suspected to be behind last year's severe beating of Panagopoulos' predecessor, in central Athens. No one has been arrested in connection with either incident.