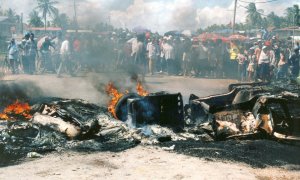 East Berbice, Guyana - More than 1,000 anti-police protesters used burning cars and tires to block a section of the Corentyne Highway between Guyana's capital of Georgetown and the neighboring country of Suriname. Demonstrators were able to create an autonomous zone free of police and government officials that included Tain, Port Mourant, Rose Hall and other adjoining villages on the Corentyne. Residents took to the streets on Friday to call for the permanent removal of a corrupt police force they accuse of being responsible for a number of recent armed robberies.

Government officials, hoping to resolve the situation quickly, were disappointed Saturday after protesters ran them off with stones and fire bombs. Police returned in greater force the following day to disperse demonstrators with tear gas and rubber pellets and dismantled the barricades with bulldozers.